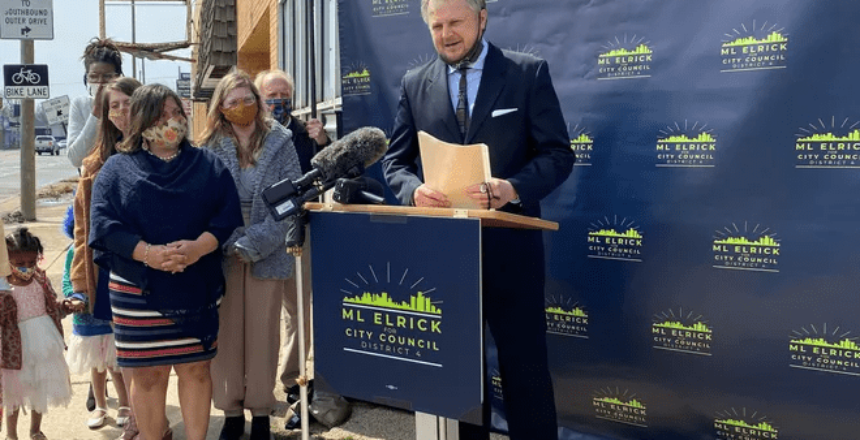 Detroit — Journalist M.L. Elrick laid out a platform of opportunity, safety and accountability Monday as he kicked off a campaign for an east side City Council seat.

Elrick, with his family at his side, stood at the front entrance of the shuttered former paint store on East Warren Avenue that he worked at as a teenager, telling a small crowd that Detroiters need elected officials who “put public service above self-service.”

“I started my career as a reporter 30 years ago and I spent much of that time putting government under scrutiny, exposing waste, incompetence, corruption. I’ve also told the stories of underdogs, people who are mistreated, abused, their rights denied,” said Elrick, a former Detroit Free Press reporter. “It’s no longer enough for me to be just the scorekeeper, it’s time for me to get in the game.”

The Pulitzer Prize-winner and “Soul of Detroit” podcast host known for investigative reports involving elected officials turned in petition signatures Monday morning to be vetted for the August primary.

Elrick in a 2018 television investigation scrutinized Spivey’s collection of nominating petition signatures for the ballot in the last city election cycle. The report centered on allegations that Spivey and his campaign had misrepresented who circulated ballot petitions. In the report, Elrick noted it is unlawful for circulators to say they witnessed the signing of a petition when they did not. Spivey, in a written response to Elrick from an attorney, said campaign workers were given clear instructions to follow the rules in obtaining petition signatures. The letter added that a deadline for filing a complaint over the petition signatures had elapsed.

Elrick is among a high-profile field of potential contenders for the seat. The East English Village neighborhood resident made his bid official a week after fellow contender Toson Knight, a youth mentor and dean of students for the city’s public school district, shared his intentions with supporters in the Eden Gardens neighborhood. Retired Wayne County Circuit Court Judge Virgil Smith also has said he plans to make a bid for the seat. Spivey’s chief of staff, Keith Jones, also has pulled petitions for the District 4 seat.